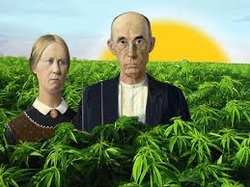 Lately it had seemed as if the Federal Government was coming to grips with the fact that public opinion is quickly shifting on the wisdom of continuing to treat marijuana as an irredeemable devil weed, and its users as hardened criminals. In the wake of Colorado and Washington legalizing the recreational use of marijuana for adults in 2012, President Obama appeared to signal that the Feds would be taking a step back from trying to stifle state experiments in legalization. “We’ve got bigger fish to fry,” said the President. “It would not make sense for us to see a top priority as going after recreational users in states that have determined that it’s legal.”

Late last year, Attorney General Eric Holder appeared to follow suit. He told Washington’s and Colorado’s governors that the Department of Justice would be letting those states go forward with implementing their democratically adopted legalization schemes. Holder also set out new priorities for the DOJ in marijuana enforcement, such as focusing on keeping marijuana out of the hands of kids and keeping it from being transported to other states.

Unfortunately, the rest of the government doesn’t seem to have gotten the message. In the latest instance of a government agency trying to block legal access to marijuana, the obscure Bureau of Reclamation has stepped into the fray, blocking the use of federal irrigation water for the cultivation of medical or recreational pot. This action follows on the heels of the Treasury and Justice Departments’ inconsistent messaging on whether banks will be able to handle funds related to legal marijuana businesses.

This patchwork approach to how the Feds treat businesses and individuals engaged in state-sanctioned marijuana activities will not beat back the legalization wave. Instead, it will only create problems, and slow the process of implementing intelligent and effective reforms.

It is too late to turn back. The choice now before us is between legalizing certain uses of marijuana well or poorly. We applaud Oregon Representative Earl Blumenauer in his efforts to make sure legalization is done right. We just wish more of the Federal government would join him.